So here are just a couple of the photos we took with Ben yesterday (www.benritter.com). These are my personal favorites. We decided to keep some of the other ones under wraps for now, just so we can feel like we aren't giving away everything all at once. Not that the other shots are anything extremely interesting, like Sentence and I dancing naked or anything -- but they are nice and I like the idea of revealing them over time.

So, here are the first two: 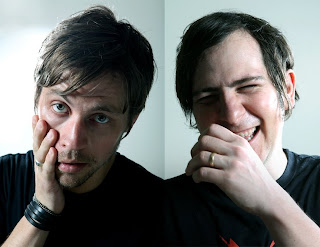 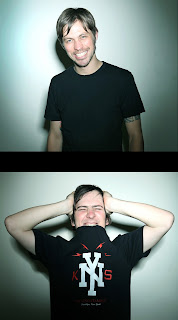 So, I dig these a lot because this is what Sentence and I are actually like in real life. We are weirdos. And we have fun together. And we like to make fun music. Not that our music is silly party music. But I think it is fun nonetheless.

Our old press shots, including the shots that were in the booklet for NIGHTLIFE looked like this: 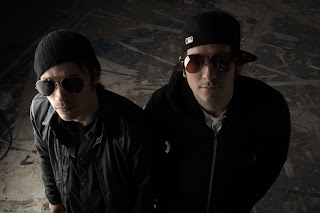 Now, a shot like this is very clean, and very well done. But this does not reflect Sentence and I's personalities at all. And these pictures, as well as the art direction on NIGHTLIFE in general, is something that I've wanted to talk about for a while.

We named our album NIGHTLIFE, because we had a song called "Nightlife." The song title is meant to be ironic. In my mind, it's about the time you spend by yourself up late at night when you are an insomniac. So, to call it "Nightlife" is deliciously ironic, right? What a hilarious joke! Ha. I think it's pretty clever, myself.

So we took a bunch of pictures of us looking "cool" in aviators, etc., thinking that once people listened to the album they would understand the irony a little bit. NIGHTLIFE is not a party-jam-type album. And I think almost every review we got mentions that right off the bat. Like, "Despite the album's title, NIGHTLIFE is not packed with party-type-jams."

But I still think that people took the cover and tray art at face value. And I think that these shots turned a lot of people off to us, thinking that we take ourselves very seriously, and that we are actively trying to be cool, etc. Let me tell you something right now. Sentence is actually pretty fucking cool. I am not, though. And Sentence doesn't act like a cool guy, which is why I love him so much.

So that's why I'm so excited about these new shots. We are weirdos. These shots show us being weirdos. It's weird to write this much about photo's, but it's something that has bugged me since we released NIGHTLIFE.

I feel like we are on the right track.

Hope you dig them too.

Email ThisBlogThis!Share to TwitterShare to FacebookShare to Pinterest
Labels: E