So me, Sentence, and Miller rolled through to the Press Day yesterday for the Brooklyn Hip Hop Festival, which is put on by Brooklyn Bodega. (www.brooklynbodega.com)

The press event was in DUMBO, right by where the festival will jump off. It was actually in the same building that our drummer, Andrew, keeps his studio, which was pretty funny.

Anyway, generally these events are pretty horrible -- cramped spaces with mad artists who all think they are the shit fighting over interview time. This one was actually pretty alright. They even had room temperature Brooklyn beer for everyone.

We did a bunch of interviews and had some photos taken and even ended up rapping into cameras which we never ever do. Me and Sentence stuck out like the sorest of thumbs. I think we are going to be very, very different from everything else that is going on on the 20th.

We bumped into our friend Conscious which was dope. He knows EVERYONE! Probably because he is the nicest dude ever and also a dope artist. His blog is in our blog roll if you want to check it out, which you should.

We also bumped into Nyle, who lives at Asterisk (it has a new name now but I don't remember it) and let us come through and film our music video there. Nyle recently made a cool video based off that Lil Wayne song Let the Beat Build. Check out the video:

If any of our interviews get posted anywhere I'll let heads know where to look.

Check the poster out. We are the last name on it. 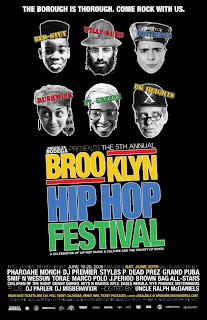